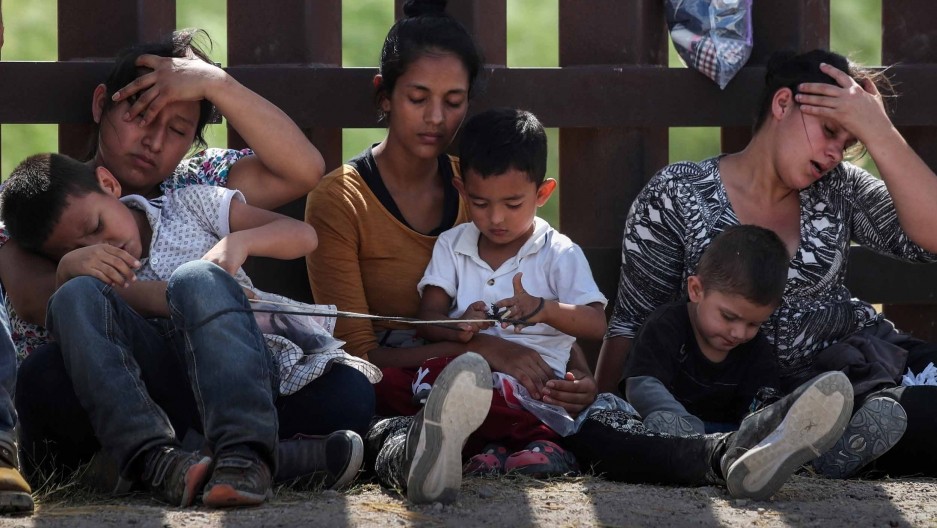 One of the many headlines making news over the summer was the U.S. President’s decision to cut foreign aid to three Central American nations – Honduras, Guatemala and El Salvador. Most of the people seeking asylum at the U.S./Mexico border are fleeing abject poverty and the resulting violence in their home countries. Historically, the U.S. response to crises beyond our borders has been to provide economic support, a policy which has played a vital role in advancing peace and prosperity around the world ever since the Marshall Plan helped stabilize Europe after World War II.

This is not only motivated by a desire to be a “good” (moral) global citizen, but by a self-interested and rational desire to reduce global threats to enhance the security and prosperity of the U.S.’s own citizens (a position motivated by reason). It arises from the view that efforts to stabilize the economies of other countries will ensure a greater degree of peace and prosperity for U.S. citizens as well. Former Secretary of Defense, James Mattis, has often been quoted as saying “…if you don’t fund the State Department fully [so that it can provide aid to countries experiencing famine, poverty, disease and war], then I need to buy more ammunition.”

At least in regard to this particular issue, the current U.S. President appears to operate from a different viewpoint than previous administrations – one in which people who suffer poverty and violence should be “disciplined” into behaving differently, rather than supported as they strive to build prosperity in their own countries.

In order to evaluate which of these positions makes the most sense under the current circumstances, we need a way to explore the various arguments through reasoned dialogue so we can engage in a more collaborative approach to solving the problems that we face. This “thinking together” is precisely what a systems approach provides.

Systems Thinking is a discipline of thought which allows us to see beyond simple, linear, cause-effect relationships. It helps us see how each element in a system impacts all the others and how the actions we take to “fix” problems can cycle back to make the problem worse. “It is a framework for seeing interrelationships rather than things, for seeing patterns of change rather than static snapshots. … [it] is a discipline for seeing the “structures” that underlie complex situations..” The Fifth Discipline | Peter Senge

The verb “seeing” appears in the above definition five times. This is no mistake and it is not mere metaphor. One of the most valuable tools in the System Thinker’s toolkit is the causal loop diagram (CLD) which helps us create a visual “map” of the problem we are facing. When we can map the system for everyone to see we can test the assumptions that we are making and examine the biases that inform our positions, only then can we enter into rational dialogue about what is really going on.

Here is how we might map the asylum-seeking system in this particular example: 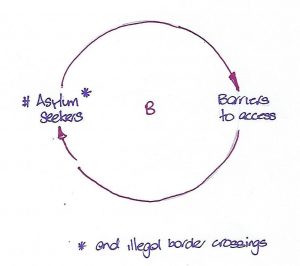 As the second diagram (below) shows, the delayed effects of making access more difficult are to increase the anxiety among people from the asylum-seeking nations and increase their sense of urgency about making their way to the border.

Rather than reducing numbers at the border, this second part of the system has the effect of increasing the number of asylum seekers (and people crossing the border illegally). It is an example of a common pattern known as “Fixes that Fail”, where short term efforts to resolve a problem actually cause long term side effects (also known as “unintended consequences) that make the problem worse. 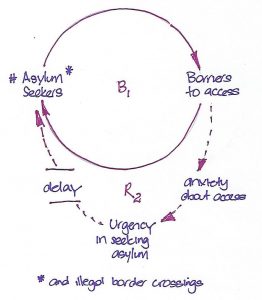 The second loop in this story is a “reinforcing loop” (labeled with an “R”). Reinforcing loops drive the system in the same direction, never achieving equilibrium. They are more commonly known as “vicious” (or virtuous) cycles. In this example, increasing barriers to access continually drives the number of asylum seekers upwards as people become more and more anxious about their ability to make it across the border.

This is not speculation on my part. The data and evidence that this has been happening comes from the administration’s own department of Customs and Border Protection. [See the New York Times and Washington Post.]

But this is not the end of the story either – I began this article by referring to the President’s decision to eliminate foreign aid to the countries that are the main source of the asylum seekers. There is a third causal loop operating in this increasingly complex system. As the number of asylum seekers (and illegal border crossings ) goes up, the US cuts back foreign aid which, in turn, leads to escalating desperation (and even greater willingness to risk the journey) as poverty and violence in the source nations becomes even worse. Once again, rather than reducing the number of asylum seekers, this decision amplifies the effects within the system and makes the end result even worse. This “reduction in foreign aid system is also a “reinforcing” (R) system, or vicious cycle. 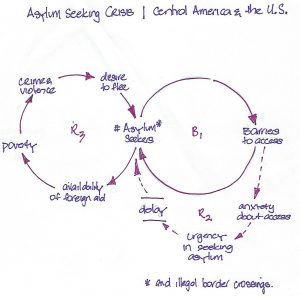 Now you have two “loops” driving an increase in the number of asylum seekers (and illegal border crossings), which is in direct opposition to the stated purpose of the administration’s policies.

Together these three cycles will drive an escalating problem until such time as the conditions at the U.S.- Mexico border are worse than those from which the Central American refugees are fleeing. Perhaps it is worth pausing for a moment to consider what that situation might look like, as well as how it might affect the billions of dollars of legitimate economic activity that crosses the border in both directions and the impact that might have on the millions of people caught in this escalating crisis.

The value of this visual approach to mapping a problem is that is does not make judgments about the “rightness” or “wrongness” of decisions and other variables within the loop, it merely offers us the chance to explore “What happens if…” scenarios using reason and logic. It does not address the question about whether the U.S. should or should not take in more asylum seekers. It merely lays out the cause and effect relationships that are operating in the systems so that we can examine the effectiveness and ineffectiveness of the various strategies in play.

It is possible that my own logic in creating these stories is faulty or that my data is wrong. If that is the case, I can invite others to share alternate views of the system. Together we can describe and discuss various “hypotheses” about the system to find out which version fits the facts best. My illustration of this system is not “right”, it is just my best effort to make sense of the observable and historical data about what is going on. If we enter into this problem-solving process with curiosity and an open mind, we may find ways to achieve the outcomes we want; presumably, in this case, eliminating the need for people from Honduras, Guatemala and El Salvador to seek asylum in the first place.

However we might wish it, our world is not going to become less complex, at least, not in the short term. However, we can use the tools of systems thinking to help us understand the social and economic structures we have created and identify ways to have the most positive impact. One of these tools is the kind of visual thinking illustrated here – a method that allows us to explore problems with less bias and from multiple perspectives in order to discover solutions that work, rather than just explanations that fit our flawed and biased positions.

Want to learn more about a Systems approach to problem-solving?

Several institutions of Higher learning offer courses in Systems Thinking. I am most familiar with “Systems Thinking and the Learning Organization”, a foundational course in the Masters of Arts in Organizational Leadership program offered at Medaille College. (Full Disclosure – this is a course which I have taught as an adjunct instructor since 2012)